For people not familiar with H5P libraries, we'll first clarify what an H5P library is. An H5P consist of content and one or several libraries, where:

A library can be runnable, but don't have to. If it is runnable, it means you can create content using this library. If it is not runnable, it is a utility library used by other libraries.

So, let's get back to what we were supposed to blog about, the H5P library admin features. All of the below features are found using the H5P libraries admin menu entry on both Wordpress and Drupal.

Get an overview of all installed libraries

You no longer have to wonder which version of a library is installed. The main H5P library admin page will list that for you:

In addition to title and version, this list contains the following columns:

Get detailed info for each library

Earlier it was no way to find out which content is using which libraries. This is no longer a problem. Just click the info button for a library, and you will see the following page: 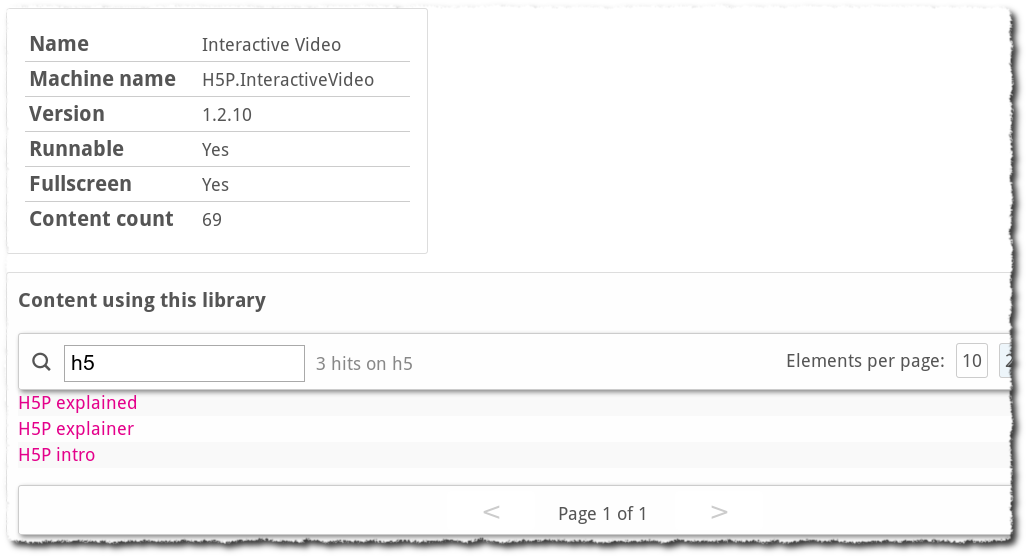 In addition to the information displayed on the top, this page contains a searchable/pageable list of all content using this library.

An H5P file does not have to contain content. It is possible to create a library only H5P file, which means you get no example content when installing the H5P. But, you do get the editor capabilities, which make you able to create H5P content for a given library. On the main library admin page, we have added the ability to upload an H5P containing libraries only. I.e, if it contains content, we will ignore it, and install the libraries anyway.

Upgrade all installed libraries at once

We have seen how impractical it has been to upgrade all H5P libraries on a site. This task has consisted of downloading one H5P-file for each library from h5p.org, and uploading them to the local site. We have made this much more easy, by adding a feature that will upgrade libraries which already are installed. On Wordpress, this ability is found on the main library admin page. On Drupal, this is found on the following path: /admin/content/h5p/libraries/upgrade-all.

An H5P containing all libraries is available on h5p.org.

The last feature is hopefully something you don't want to use, but we have added it anyway, namely the ability to delete a library. This action is only available if there are no content using the library and there are no other libraries dependent of the library.

There is yet another new feature which is library upgrade. This will be covered in our next blog post.