If, while making a recording, you use the retry button (screenshot: 1-of-3.png) a message is displayed saying that your current recording with be lost (screenshot: 2-of-3.png). What infact happens is that the recording is kept and appended to the start of the next recording.

If instead you click the Done button (screenshot: 1-of-3.png) you are taken  to the 'Download or Retry' page (screenshot: 3-of-3.png). Using retry at this point works correctly; your originally recording attempt is lost.

This error has only been tested on Chrome using a Windows 7 desktop PC. The bug is present while working with the example on the H5P site, or when creating a next instance of the Audio recorder via Moodle (3.0).

1. Start a recording - record for a short time, say 10 seconds

Note that the first recording was not deleted at step 3 and the total recording time will be shown as (for this example) 20 seconds.

If you play back the recording you will notice that the original recording was not deleted; the second recording was simply added on to the end of it. 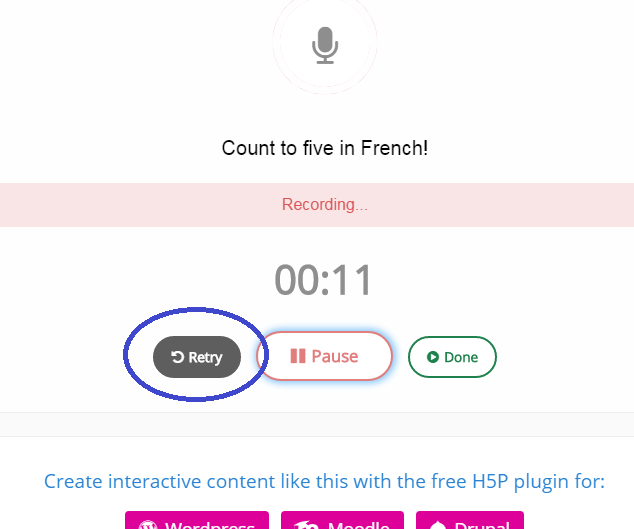 In order give your bug report the best chance of getting answered, please include the following information:

The more information you provide, the quicker the community will be able to fix it and the quicker you'll have a working solution! Thank you for the detailed explanation, if possible please fill out the missing information and re-upload the screenshots.

Thanks for reporting this bug

Thanks for reporting this bug. I've created an issue and it's progress can be tracked here:

Thanks Tim, I followed the

Thanks Tim, I followed the progress link and have to say I was inspired by your single line summary of the problem! Prompted by BV52's inital reply I edited my original post adding a set of steps to recreate the bug. I also updated screenshots 2 and 3 to avoid possible confusion. I deleted old screenshots 2 and 3 from the body of the post but now the updated versions are not showing when the post is viewed via the forum.

A fix to this bug has been applied, and will be made publically available with the next release of Audio Recorder.