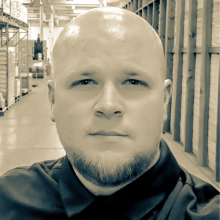 I just completed a 360° Virtual Tour and wanted to share it here.  I'm wanting to make 1 more change and that is to get a floorplan of the entire warehouse and include those in the tour as a map of where you are to provide some more context, but I don't have the file yet.

It's been a little tricky to figure out the best placement for some things and also how to best use the platform.  My first thought was to connect all of the photo spheres in the tour so that people could freely explore, but I also thought that might end up feeling overwhelming and that people wouldn't see the whole tour.  So, it's basically in only 1 direction, but I still wanted a way to be able to navigate back 1 scene if I needed to.  I eventually settled on adding an arrow to go back to the last scene at the bottom of the sphere.  So, if you crank the view all the way to where your feet would be you'll see it there.

That brings me to a few suggestions.  First, it would be great if there was a way to add a menu nadir.  A nadir is the image, black spot, or blur at the bottom of a photo sphere and its purpose is to block out the tripod or stand that was used to shoot the photo.  In its current state, the only constant reference points for people are up and down, so being able to use one of those as a menu seems like a natural progression.  I'm thinking a ring with buttons (back/last, forward/next, settings (allow people to change their own resolution), exit, etc.) to help people navigate if they don't quite take to navigating intuitively.

Second, I'd like to be able to add text to a scene that is always visible (i.e. you don't have to click on the '+' to display the text.  Adding simple things like labels within a scene (Start, End, Numbers, etc.) would be incredibly useful, but I don't want to try and figure out how to do it in a 360 photo editor.

Third, I'd like to be able to have audio automatically play when a user enters a new scene.  I originally thought that's what the auto play music feature did, but either its broken or it just plays without launching a visible player.  On this tour, for instance, I'd love the audio bits to play as soon as someone navigates to that scene without clicking any buttons.

Anyways, here's the link to my tour: https://train-bimart.com/warehouse-distribution-center-tour

I'd be interested in hearing your feedback on where I can improve the tour!  Thanks.