After a long sprint throughout December, the redesign of the H5P Editor is finally ready, and I think that the community will be very happy with the result.

Editors for all the content types have been improved to have brighter colours, better spacing, and bolder text. Have a look at how Question Set has been improved: 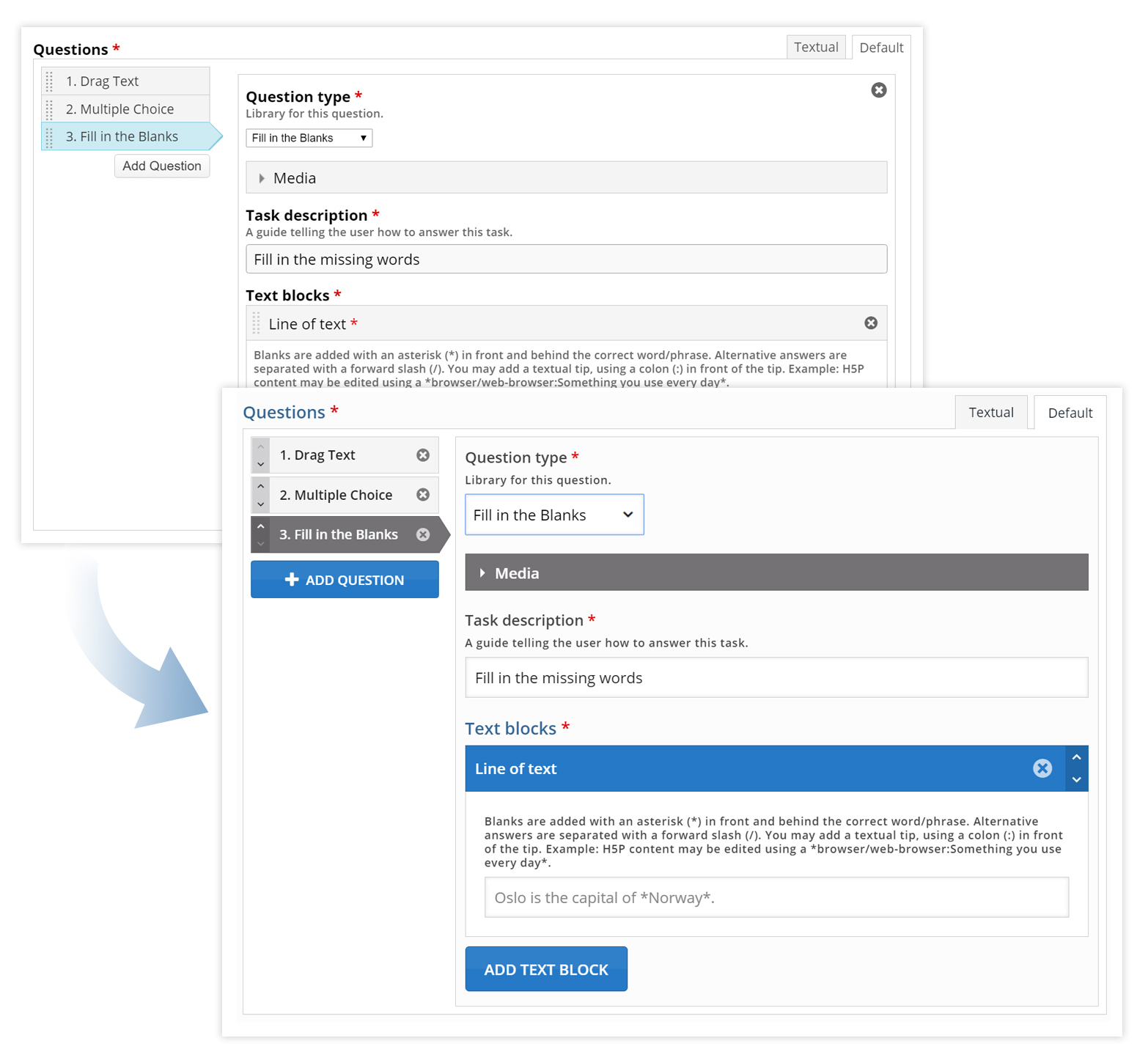 Multi Choice has also had a big transformation: 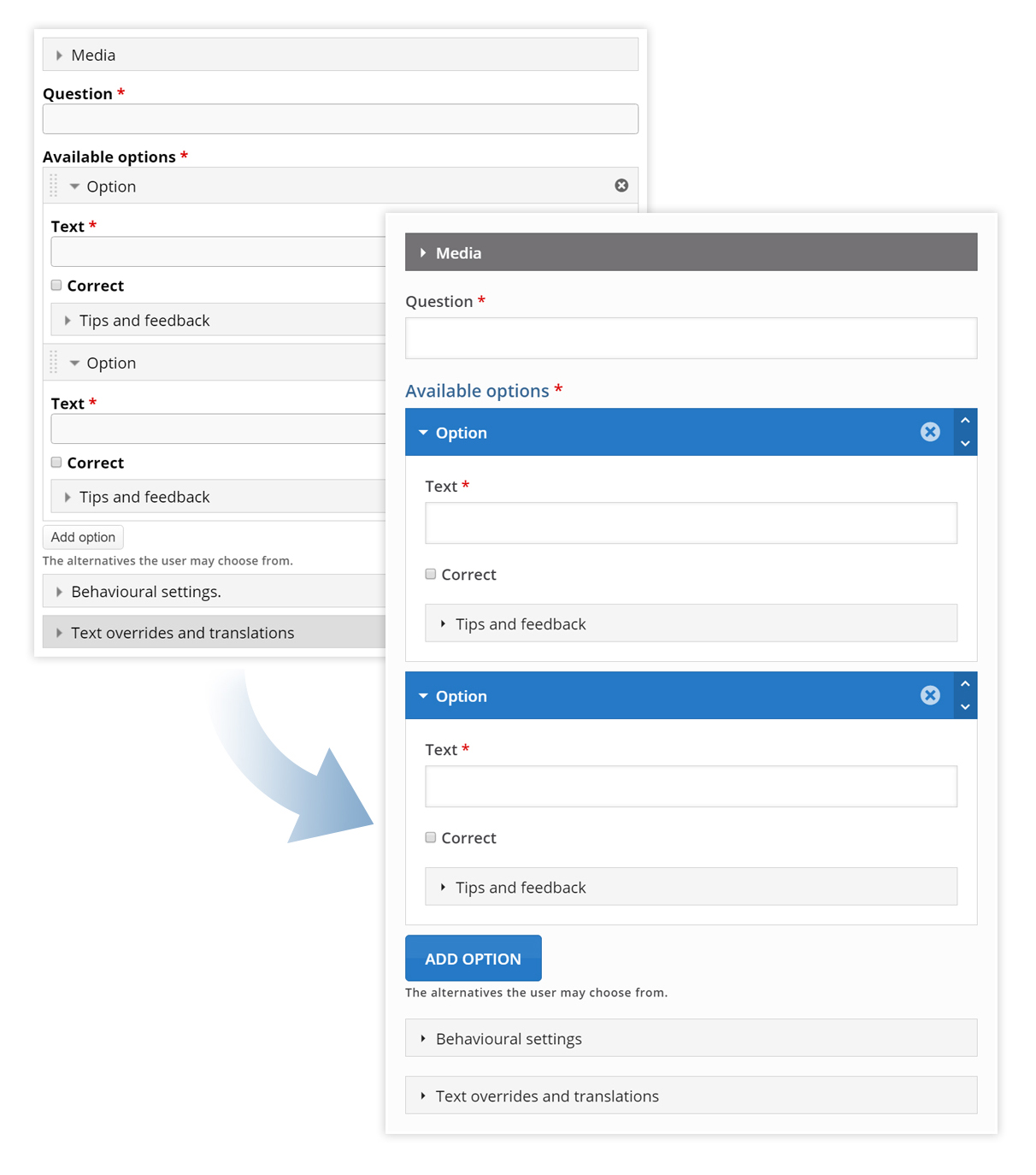 Create some new content types right now to see the rest of the editors!

A key goal of the new design was to create a clear visual hierarchy. Whereas all the titles in the old editor were of the same colour: 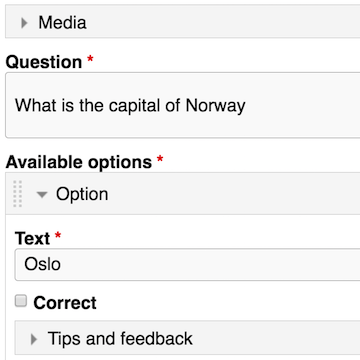 In the new editor, the size and color of titles correspond to their ‘importance’ levels which are defined in the semantics.json file: 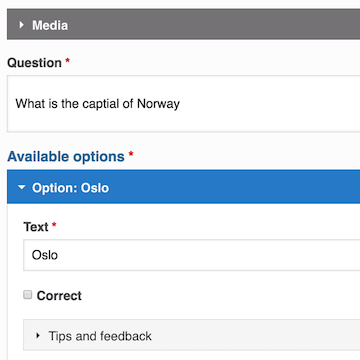 This will allow authors to intuitively navigate the editor without having to read every single label and title. The importance levels will also allow search engines to better index H5P’s in the future.

In addition to the aesthetic improvements, the new editor also comes with a great new functionality.

A previously requested feature, list items can now be rearranged by clicking the arrows on their title bars:

In addition, authors can use arrow keys to move sub-content types within Interactive Video, Course Presentation and other H5P’s which allow sub-content types. This should allow for greater precision when crafting high-quality learning material:

Since the H5P plugin exists on tens of thousands of sites and within thousands of different themes, it’s crucial that the editor can be adapted to match the style of whatever site it’s installed on.

With just a few steps the highlighting of the title bars can be changed to suit the colour scheme of any website. The new editor should look just as good on your site as it does on h5p.org. Here are just a few possible colour combinations: 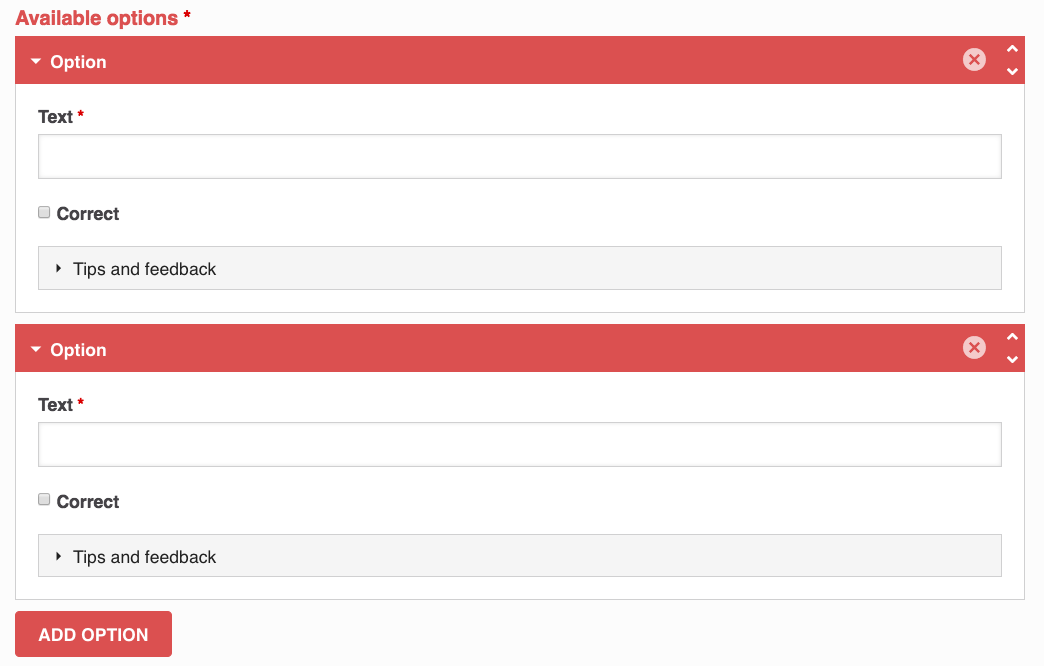 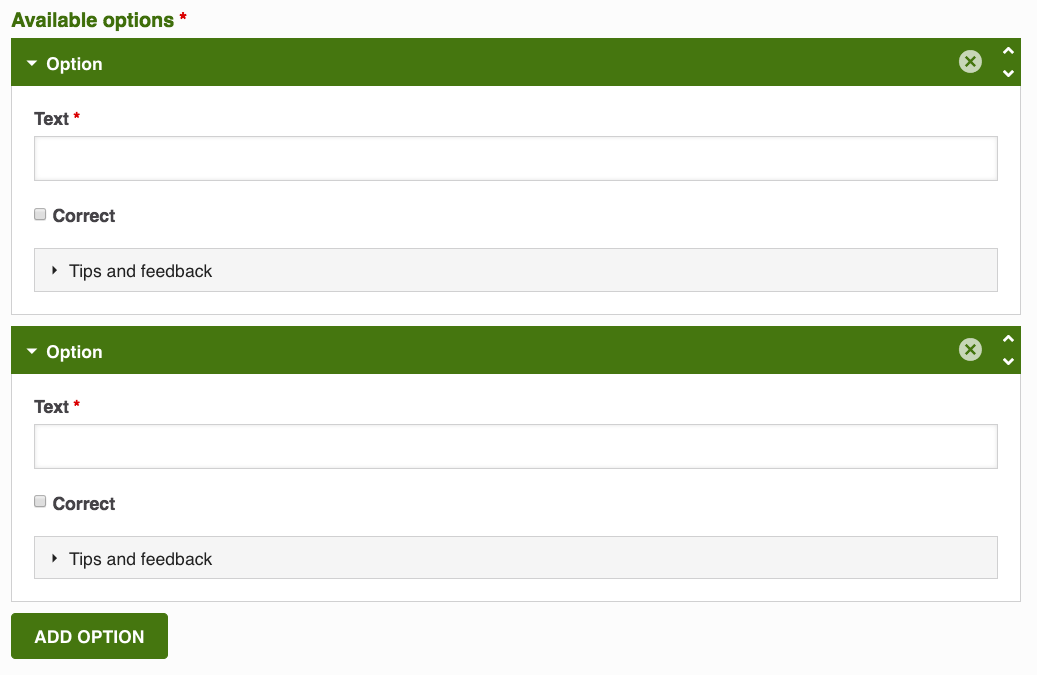 Click here to learn how to change the colours for your own site.

Accessibility lies at the heart of an inclusive and open web experience. The new design maintains a strict WCAG AA rating for all the text and their backgrounds and the new descriptions have been darkened to achieve a WCAG AAA rating. Contrast has also been added to the title bars.

Community members have often asked for the ability to have embed enabled for H5P content, but not display the embed button to everyone.

This is now possible. You may still disable or enable embed for the entire site, but you can also enable it and let the authors control the button visibility for each H5P. Those who can edit the H5P will be able to always see the embed button even if the button is hidden for normal users. In Drupal there is a separate permission for always being able to access the embed button. All these changes have also been applied for the download feature and download button.

In the past month, the H5P community has really stepped up in terms of both contributing translations and fixing bugs.

A big shout out to Oliver Tacke (otacke) and Joseph Rezeau (papi jo) who have been answering questions on the forum, posting bug fixes and contributing many high-quality translations on Github, for French and German respectively.

I’m also happy to note that some great pull requests were made such as Oliver Tacke's improvements to Interactive Video Here's a list of a few of the improvements and bug fixes in this release.

This release went through significant beta testing during the design phase.  A big thanks is due to the following individuals who have volunteered their energy and free time into moving H5P forward:

If you would like to have a preview of upcoming improvements to H5P, do consider joining the H5P Beta Tester group.

Read more about the sponsors by clicking their names:

I know there is no plugin for Joomla 3.x, but ca Joomla users actually embed a created material and downlad to embed or embed the link to a Joomla site which works?

Hi Noel,You can create the

You can create the content here in H5P.org and it already has a built in embed option.