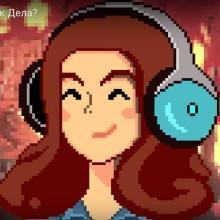 In my interactive videos, I have "poster" selected for all the interactions, and in the preview it looks normal, but when I embed it somewhere it shows up as buttons. Is there a global setting that I missed somewhere perhaps? I apologize if this has been discussed before, I did try looking through the forum and didn't immediately find anything about it. Thanks for advice!

Here is a link to them and I also included the h5p file: http://www.shannovative.com/mezhdu/listening-and-reading-activities/list...

Have you been watching your results on a small screen or in a small window? H5P will automatically switch to button mode then because otherwise the text might become too small to read.

I checked the link you posted, and everything worked fine for me.

thank you very much, that must be it. when I opened it in the full screen mode, it worked correctly. I did not realize that it switches like that. I will have to figure out how to get it to default to a larger size. I was viewing it on a big enough screen but the default frame that was coming up was small-ish.

Just wondering if there is way to disable the button mode on small screen?

That's not possible, unfortunately (but if you have someone who wants to look into it, point him/her to https://github.com/h5p/h5p-interactive-video/blob/master/src/scripts/int...).

So, if I want to customise interactive video then I guess I should download this h5p file then edit it and upload again?

Yes. And no at the same time

Yes. And no at the same time.

You can change the code directly and (after deleting the cache, etc.) you will see your changes. However, you would have to include your new code again whenever the content type has been updated, because your changes would be overwritten. There are ways to automate this to some extend, but it could fail if the official code is changed at the same position.

One way to avoid that hassle is be to make the changes (you could for example add an option to the editor such as "ignore mobile mode") and create a pull request on github, asking to merge your code with the official code of H5P. However, you should probably get in touch with the core team beforehand. I could imagine that you're requirements are somewhat particular, and chances are that your additional option would not be used by too many people, but make the editor a bit more complicated.

Another way is to use so called hooks that H5P offers (see documentation about customizing and extending). However, I have never used those before myself and unfortunately cannot tell you if they offer the functionality that you need for your changes.